Although I wasn’t aware of it at the time—being primarily interested in sex, drugs, and rock and roll— my professional life began in the summer of 1969 as a temporary assistant projectionist at the Canadian Broadcasting Corporation in Toronto. The film and television industry does not offer a lower entry level position. As for the years prior to 1969, there’s not much to tell, but if you need a wig-selling, fork lift truck driving, extruded aluminum quality control inspector, I’m your man.

w? It turned out I had a knack for making movies. Temporary became permanent, and my career path quickly traveled through film assistant, assistant film editor, negative cutter, sound editor, and finally film editor. At the CBC, I worked on hundreds of productions that ranged from the Nature of Things to promotional spots, from Country Canada to filmed dramas, from Front Page Challenge to obituaries.

In 1972, my supervisor explained to me that I had exhausted my promotions based on merit and henceforth they would be decided by seniority and my colleagues’ retirements or deaths. On that morbid news, I left the CBC to work as a freelance film editor. Editing jobs ranged from corporate films and television documentaries to assisting on feature films (assistant sounding editing to Foley stages). The Foley stage is where all the sound effects enhancing what you hear in a feature like film-footsteps, clothing rustles, crushing skulls-are made. Wanting to do more than edit, I bought (in partnership with a usurious leasing company) an Arriflex 16ST camera, a Nagra 4.2 tape recorder, and much film production paraphernalia, and added directing and cinematography to my editing skills.

Until 1980, I was involved in hundreds of productions that included wildlife documentaries that took me from the Canadian north to South America, from Australia to the Philippines.

In 1980, my career turned green: a consequence of a deep concern about the environment that I acquired from doing programs about wildlife,

and an offer from a client: the International Fund for Animal Welfare. My relationship with the IFAW began in 1973 when I directed, shot, and edited the 30 minute documentary, Seal Song, about the Canadian seal hunt. Seal Song became part of the long-running British television series Survival. After co-producing with ITV-Edmonton the award-winning children’s television series Nuggets, I closed my film and television production company to work full time for the IFAW. My brief at the IFAW was to develop a program and strategies for the involvement of the IFAW in the political process in Canada, the United States, and the European Community. Between 1980 and 1984, I developed and managed various political, election, and public relation campaigns in Germany, the United Kingdom, and Belgium that achieved the now-famous (or infamous if you’re in favor of the seal hunt) “Ban” on the importation of baby harp and hooded seal products into the European Community.

The Ban reduced the number of seals killed in Canada’s commercial seal hunt from almost 200,000 per year to about 20,000.No other campaign before or since has done as much to help Canada’s harp seals. Recent initiatives based on the same strategies and tactics used in the 1980s, however, may end the seal hunt for good.

Covering a broad range of activities, my work for wildlife with the IFAW included film, television, and radio production; development of political campaigns and strategies; fund raising development; and representing the IFAW at numerous scientific, political, media, and animal welfare events seminars, workshops, and conventions.

In 1985, I left the IFAW to help establish the International Wildlife Coalition, home of the Whale Adoption Project. My work for wildlife and the 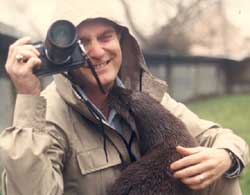 environment with the IWC are chronicled in Rescue the Earth: Conversations with the Green Crusaders by Canadian writer Farley Mowat.

Another career change took place in the late 1990s, motivated by two factors. The first was my finally admitting that the environmental movement was making no net progress in protecting our environment. Despite 5000% growth in monies and membership between 1970 and 1998, the international environmental protection community achieved a further 40% degradation in our environment. The second influencing factor was the remarkable advances in television production technology resulting in production and post production systems declining in cost by a factor of 10 while dramatically increasing image and sound quality.

Digital video and audio technology gave me the opportunity to resume television production. Freed of the high overhead and equipment costs of film and analog video technology, making documentaries and other productions can be a one man operation. Today, I have the equipment, software, and expertise to  not only complete most basic television productions, but also to add high end production values normally seen only on high budget programs. Indeed, many of my digital video-era productions have been conceived, completed, and gone to broadcast with the assistance of only one or two other people. 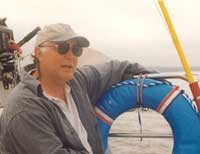 Today, I divide my time between video production and providing campaign, fundraising, and management consulting for progressive non-profit organizations such as Animal Alliance of Canada, Animal Alliance/Environment Voters Party of Canada, and For Our Grandchildren and creative artists like Barbara Kyle.